Samsung Heavy Industries has successfully completed many of the world's first and largest shipbuilding and offshore EPC projects, with sole aim to establish global leadership in each of the participating market segments.

Most notably, it has achieved unbeatable leadership in the high-tech high-value shipbuilding sector by maintaining the world’s No. 1 share in the drill ship, LNG carrier and FPSO markets.

The company has developed and built the first Arctic Shuttle-Tanker and LNG-FPSOs in the world, and has pioneered new market developments by developing innovative products such as LNG-FSRU, and various ships for polar applications, Arctic Ice-Breaker Container Ships.

In the offshore facilities sector, the company has fortified its reputation through its excellent technology and rich experience, by successfully delivering the world’s largest semi-submerged offshore drilling platform.

In addition, the company has operated the electricity and electronics business by converging its shipbuilding & offshore business with digital technology. It provides ship network systems, FuGas(fuel gas supply & storage system) and PURIMAR(ballast water management system). Its technological excellence has been highly recognized in the global markets. 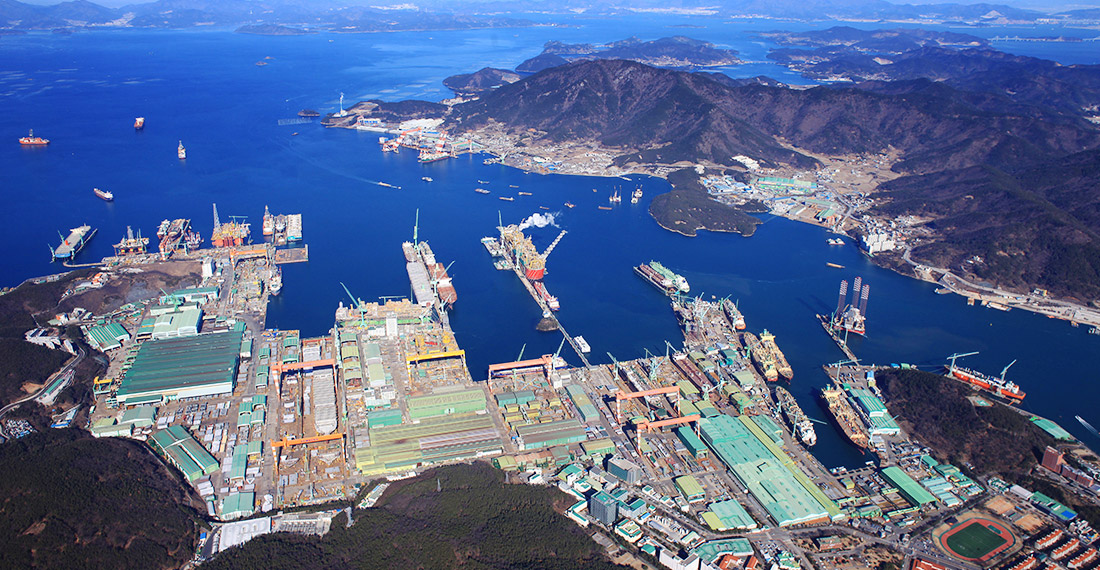 The dock turnover rate is the number of ships that a dock can launch ships. The greater the turnover rate indicates the more sophisticated shipbuilding capacity and production efficiency.

Mostly ultra-large container ships, LNG carriers and LNG-FPSO are built at this dock, which boasts the world’s greatest production efficiency by having the yearly dock turnover rate of 10 and the launch of 30 ships per year.

The turnover rate of 10 is a very valuable result that has been achieved through the SHI’s scientific and fundamental approach to building, such as making large-sized ship blocks, shortening the main engine loading period and efficiently utilizing facility space by using ultra large-sized cranes.

Geoje Shipyard is highly praised for overcoming the limits of shipbuilding capacity due to limitations in facilities based on its technological process.

Recently it acquired the world's first ISO50001 certification, an energy management system standard, setting a great record with all the international standards for the first time throughout shipbuilding industry.

Goeje Shipyard has developed remarkably intelligent robot systems such as a spider automatic welding robot for LNG cargo tank, a wall-climbing, vacuum-blasting robot, and a inspection and cleaning pipe robot. Using these robot systems, it records 68% of production Automation rate and secures perfect quality as well as employees' security.

Operating under the motto, “Project-associated R&D, improved performance and cost competitiveness for enhanced product competitiveness and maximized engineering and building efficiency through the use of ICT technologies,” the Samsung Heavy Industries Central Research Institute is engaged in a variety of research tasks. Samsung Heavy Industries continues to provide much-needed high-quality product performance in order to meet customer demands through sustained R&D activities and infrastructure expansion. 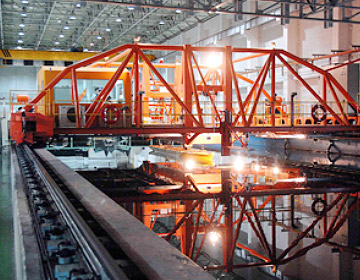 Samsung Ship Model Basin(SSMB) situated in Daejeon, has one of the world's largest commercial towing tank with 400 meters in length, 14 meters in width, 7 meters in depth.

Based on this, Samsung Heavy Industries has been concentrating on developing ship performance and new type of ships such as securing the function of linear motor ? propeller, the stability of ship movement ? navigation and developing fuel saving device.

Also, a wave maker that is composed of 40 independent plunger units can simulate the real operation state of ocean vessels. 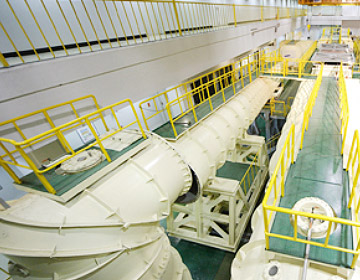 Samsung Heavy Industries constructed a large low-noise cavitation tunnel by its own technology in 1996, which was placed in SSMB as one of the world's largest commercial cavitation tunnel. This cavitation tunnel has two different test sections where the No. 1 section enables high-speed model tests through generating the tunnel flow speed up to 28 meters per second.

The No. 2 section can accommodate the maximum of 10m-length entire model ship, and an impeller facilitates the circulation of 650 tons of water inside the tunnel at a speed of 12 meters per second. 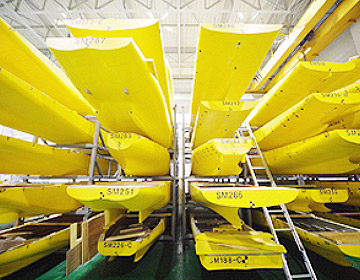 To carry out the most accurate model tests in both the towing tank and the cavitation tunnel, the precision of the ship and propeller model manufacturing is essential.

A model ship up to 10 meters in length and a model propeller up to 0.3 diameter can be manufactured by utilizing a high-precision 10-axis CNC machine (two 5-axis manufacturing heads) and a 5-axis CNC machine respectively in full automation.

Up until now, it manufactured 600 Ship Models and 700 Propeller Models with a margin of error of ±1% comparing to actual ships.